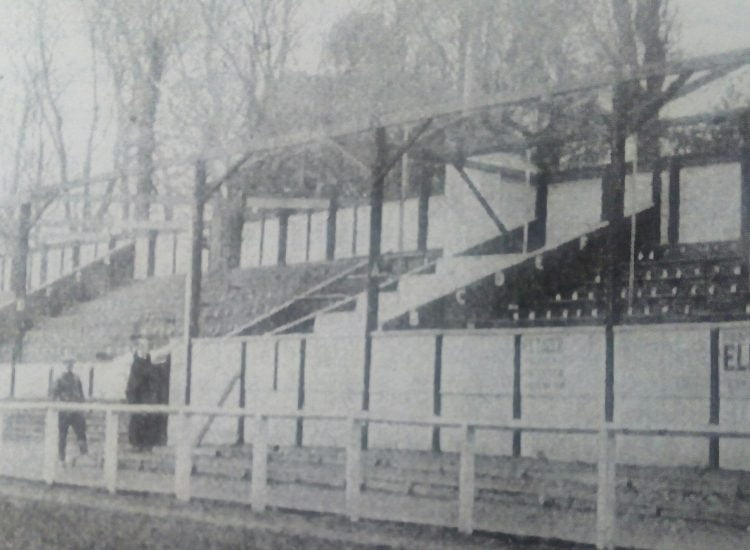 Having gained a measure of respectability following an 18th placed finish during 1929/30, United had high hopes as they looked towards their first full campaign under manager Frank Womack. Unlike his predecessor, Percy Mackrill, Womack had been granted sole charge of team selection, meaning there was no place to hide if things didn’t go to plan!

With that in mind, there may well have been a few nerves jangling in the Womack household following a poor start to the season, as his side emerged from the first six matches without a win to their name. A first day defeat at Watford (0-2) was followed by more disappointment against Plymouth Argyle (3-4 home, 0-5 away) and Coventry (1-3 home), before The Magpies gained some credit towards the end of September, following draws against Clapton Orient (1-1 away) and Exeter (0-0 away). Their next game saw them finally break their duck at the seventh attempt, as a brace from former Thames forward Les Robinson clinched a 2-1 home win over Brentford.

Although Torquay promptly lost again the following weekend (0-2 at Bristol Rovers), their impressive 5-2 victory over Brighton did at least make it back-to-back home wins. Unfortunately, a return to poor form saw just one more win gained from the next eight matches, although ironically that was also by a 5-2 margin, with Walsall also leaving Plainmoor empty-handed in mid-November. Either side of that success, the results were less encouraging though, with games against Swindon (1-2 away), Southend (1-1 away), Luton (2-2 home) and Bournemouth (1-4 away) failing to produce a win prior to the hammering of The Saddlers, whilst the fixtures after it against QPR (1-1 away), Fulham (2-4 home) and Crystal Palace (2-2 home) yielded just two points between them. Further disappointment arose between the latter two matches, as United also made an early FA Cup exit away to Bournemouth (0-2).

A 2-0 win at Gillingham in mid-December therefore provided a much-needed confidence boost, particularly as it represented the first away victory of the season for Womack’s side. However, The Magpies failed to seize the initiative, as they went down to a 2-0 Plainmoor defeat against Northampton in their very next game, before Christmas evening was spent reflecting another reverse, this time at Newport (1-2). 24 hours later though, those same opponents were on the receiving end of a 3-2 home win for United, before Torquay signed off the decade impressively in front over their home fans three days later, as opening day opponents Watford were comprehensively beaten 4-0.

If Womack was hoping that the New Year would bring fresh good fortune to his side, he was to be sadly mistaken, as the side suffered a terrible opening two months of 1930, with all four matches in January against Coventry (1-4 away), Norwich (0-2 home), Clapton Orient at home and Brentford away (both 0-5) all ending in defeat, before a third 0-5 thumping, at Brighton, saw February begin equally badly.

Although home draws against Swindon and Southend (both 1-1) did bring an end to their losing run, normal service resumed in early March, as the side went down to a 1-3 loss at Luton. With results hard to come by, United were by now in an increasingly perilous position towards the foot of the Division 3 (South) table. Hope was about to emerge though, from a most unlikely source.

With The Magpies still chasing their maiden victory of the year, Womack decided to take a gamble on 17 year-old amateur winger Ralph Birkett from Dartmouth United. His introduction paid off instantly, with his superb play down the right setting up four goals for his new teammates in a 7-0 home crushing of cup victors Bournemouth. Needless to say, Birkett turned professional within a fortnight, thus beginning a highly successful career that would later see the player display his skills at the highest level, with Arsenal and England.

Birkett’s cameo appearances towards the end of the campaign, allied to top scorer Joe Pointon notching 14 goals in his last 12 matches, eventually saw United pull clear of re-election danger, as Torquay’s form turned from poor to inconsistent. There were a few bumps along the way, as successive defeats at home to QPR (1-3) and away to Fulham (0-1) followed the Bournemouth rout, before positive home results against Bristol Rovers (2-1) and Norwich (2-2) set up the club for an unbeaten run at Plainmoor that would last until the end of the campaign.

Their away form though, was in stark contrast to those home comforts, with a 0-7 hammering at Walsall swiftly backed up by a 2-4 defeat at Crystal Palace three days later. Thankfully the three points earned in three days at home to Gillingham (1-1) and rock-bottom Merthyr Town (4-0) bought The Magpies some breathing space, despite a 0-3 reverse against the same side the next day signalling their tenth away defeat on the trot. A 2-2 draw at Northampton in their penultimate game of the season did at least end that unwelcome run of results, before 1929/30 was wrapped up at Plainmoor in the most pleasing fashion – a 2-1 Devon Derby success over Exeter City.

Feelings between the two sides though, were notably warm, thanks to the actions of The Grecians’ board, and likewise their Argyle counterparts, as United faced potential financial ruin at the turn of the year.

A great storm had seen the roof of the grandstand blown off entirely, and with the club ill-equipped to replace it, chairman Charles Dear issued a stark statement advising that the club’s very existence was now in doubt. United’s Devon neighbours both assisted Torquay’s fund-raising efforts by playing friendlies at Plainmoor, with donations also arriving from all ends of the country. That generosity, combined with the sales of Sid Can and Fred Corbett to Manchester City, saw the club just about pull through, as team secured 19th place, finishing ten points clear of bottom side Merthyr.