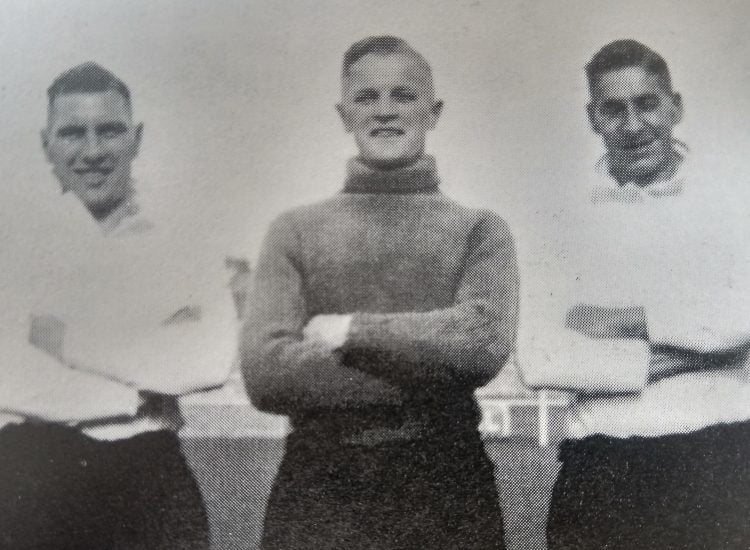 Following the end of Second World War, Torquay United decided to open its doors once again for the 1945/46 season, however it would be another year before League football returned to Plainmoor.

During this short period, the club competed in the war-time equivalent of Third Division South and its Southern Section Cup counterpart, as well as a rejigged version of the FA Cup, which for the only time in its history was played out in a two-legged format up until the semi-final stage. Perhaps unsurprisingly, The Magpies once again failed to trouble the latter stages of the competition, as they succumbed to Newport County in the first round. United’s 0-1 defeat at Plainmoor would ultimately prove decisive, as the team could manage no more than a 1-1 draw in Wales.

Former Reading manager Billy Butler had led the club during this interim period, however it another Butler, former Arsenal and Torquay centre-half, Jack, that would eventually take charge for United’s first League campaign in eight years.

With supporters eagerly anticipating the return of professional football, the 1946/47 season began in the most exciting fashion possible, with a Devon Derby against Exeter City at St James Park. In front of over 11,000 fans, the two sides cancelled each other out in a 1-1 draw, with Dudley Kernick netting for Torquay.

Notoriously slow starters, September proved to be very much a mixed bag of results, with a 2-0 home win over Walsall being followed up by successive 2-2 draws against Mansfield (home) and Reading (away), before successive defeats against Bristol Rovers (0-3 away) and Southend (0+1 at home) preceded a goalless draw at QPR.

More of the same would follow in October, with United on both ends of two five-goal thrillers at Plainmoor against Leyton Orient (3-2) and Bristol City (2-3). Their wait for an away victory would go on however, with the two intervening trips to Ipswich and Port Vale ending in a 1-1 draw and 1-2 defeat respectively.

That maiden win on the road finally came at the beginning of November, as Butler’s men secured a 4-2 triumph at Swindon Town. A 2-2 home draw against Bournemouth followed the next weekend, prior to defeat at Cardiff (0-1) and a success over Norwich City at Plainmoor (2-1). There would though, be no such luck against Norwich’s East Anglian rivals though, as Ipswich put paid to Torquay’s ambitions in the FA Cup tie at Portman Road (0-2).

It wouldn’t be until December that United really got their act together, as the side notched four wins out of five, with Northampton (2-1) and Brighton (3-1) tasting defeat at Plainmoor, before Torquay were humbled on Christmas Day at Crystal Palace (1-6) in their only away game on the month. The Magpies did gain some revenge in the return meeting against the opponents a day later though (2-1), before victory over Exeter by an indentical scoreline saw 1946 brought to a perfect conclusion.

Although the New Year began with back-to-back away defeats against Mansfield (0-1) and Brighton (0-2), three straight wins without reply against Bristol Rovers at home (3-0) and even more impressively, at Notts County and Southend (both 2-0) represented a run of eight victories in their last eleven league outings. Top scorer Jack Conley particularly enjoyed himself during this period, netting nine goals, including a hat-trick in the win over Rovers.

With February’s only fixture resulting in a scoreless draw against cup victors Ipswich at Plainmoor, it was therefore rather puzzling how four successive clean sheets paved the way for a dreadful run of form in March.

During those six matches, Torquay’s defence shipped no less than seventeen goals, including five on three separate occasions. Just one goal was netted in response during matches against Bristol City (away, 0-5), Swindon (home, 1-5), Aldershot (away, 0-0), Bournemouth (away, 0-5), Cardiff (home, 0-0) and Norwich (away, 0-2), as United added just two more points to their tally.

Although the team did rediscover their scoring boots in an entertaining game away to Watford (3-3), defeat at home to Notts County (1-2) 24 hours later made it nine matches without victory. Watford’s trip to Plainmoor (2-0) finally put an end to that barren run, however their problems in attack soon resurfaced, as they failed to net in April’s remaining matches against Northampton (0-0) and Aldershot (0-1).

An excellent start to the final month of the season saw United pull well clear of trouble though, with wins over Reading (home, 3-0) and Leyton Orient (away, 1-0), followed by encouraging showings against 2nd-placed QPR (0-0) and Port Vale (1-0) at Plainmoor. A 1-2 final day reverse at Port Vale may have concluded the season in disappointing fashion, however there was some consolation for the prolific Conley, who netted his 23rd goal in just 34 appearances.

That late upturn in results was enough to secure a highly credible mid-table finish of 11th – the club’s best placing for some years prior to the outbreak of war. By the time the campaign had finished though, manager Butler had already notified United’ directors of his intention to leave the club to take up a similar position at Crystal Palace, with former Merthyr boss John McNeil announced as his replacement.

Another notable event occurred during the closing weeks of the season, as defender Bert Head (pictured at the top of the page, left, alongside goalkeeper Phil Joslin and fellow defender Bob Keeton) was rewarded with a testimonial against Begian side RFC Malinois. Although the visitors ran out 3-1 winners, the occasion was fitting reward for a player that would continue to represent the side into the next decade.