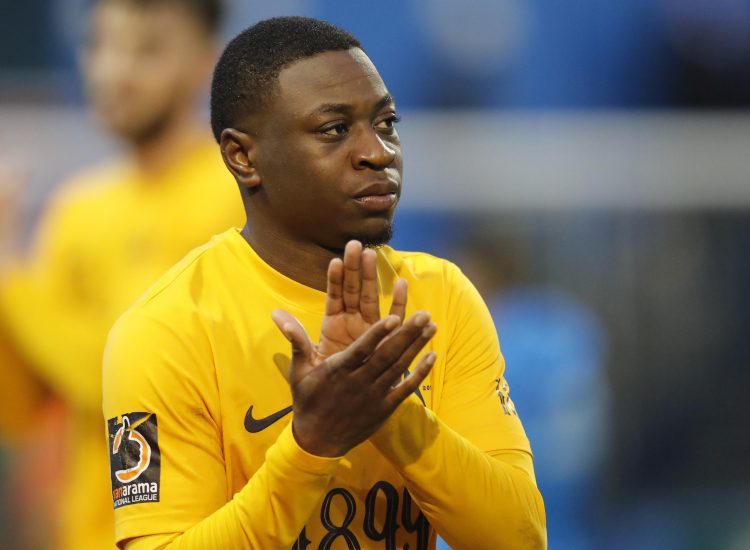 At only 22, Aaron Nemane’s footballing CV already makes impressive reading – however you won’t find the Amiens-born midfielder resting on his laurels.

After making eleven appearances for The Gulls following his arrival at Plainmoor last December, Nemane was as delighted as any of his United teammates to agree a new deal for the 2020/21 campaign, providing him with the chance to display his obvious talents at a club he can call his own.

Although born in northern France, it was a move to UK shores that saw his early promise identified by Manchester City, with Aaron joining the Premier League powerhouse in 2012 initially as a member of the club’s youth team, before signing his first professional at the Etihad Stadium five years later.

A stunning equaliser in the first leg of the 2016 FA Youth Cup final against Chelsea had already alerted a number of clubs to the youngster’s potential, however with so many world-class youngsters – not to mention senior pros – at manager Pep Guardiola’s disposal, Nemane faced a daunting battle for much-needed match action.

It was at another of British football’s most famous clubs that he would get his first taste of senior action, with Rangers eventually securing his services on a five month loan deal in August 2017.

The 2017/18 season was a testing one for everyone at Ibrox, as the Scottish giants struggled under new Portuguese coach Pedro Caixinha. After making his debut in the 4-1 win over Dundee United in early September, five more substitute appearances followed, however by November Caixinha had been relieved of his duties, with Aaron returning to Manchester at the turn of the year.

Although his spell in Glasgow has been a frustrating one, a second loan stint, this time in Holland with Go Ahead Eagles, provided the player with the game time he craved. Nemane’s impact with the second-tier strugglers was immediate, as he netted on his debut in a 5-1 defeat at NEC, with another 16 appearances gained before his return to the England.

Things were not about to get any easier at City though, with the team’s record-breaking title exploits making any chance of a breakthrough in Manchester a remote possibilty.

Having got a taste of regular football during the previous campaign, and eager for another opportunity to aid his career development, Aaron was soon off on his travels again, with AFC Tubize of Belgium his next destination, this time on a season-long loan.

With last summer signalling his permanent departure from Manchester City, Nemane was suddenly thrust into a period of uncertainty, as he joined the hundreds of other footballing hopefuls seeking a contract within the professional game.

It was to his misfortune, but ultimately to United’s advantage, that Aaron became a casualty of AFC Fylde’s managerial switch in October, with a potential deal falling by the wayside despite a promising trial with the club.

Alerted to his availability, it was United boss Gary Johnson who moved fastest, with Aaron’s arrival announced to the Yellow Army only moments before Torquay’s FA Trophy match against Aldershot on December 14th.

His inclusion in the starting line-up, and subsequent performance in the side’s 5-1 demolition of The Shots, saw him make another excellent first impression, with his awareness and eager running making him a welcome addition to the squad.

With 2019/20 curtailed early, it was no surprise that Nemane was offered a deal to extend his stay at Plainmoor by Johnson, with the exciting attacker delighted to stick, rather than twist, after two years travelling across Europe in pursuit of the game he loves.

Thank you to all our sponsors, including Aaron’s Player Sponsor: