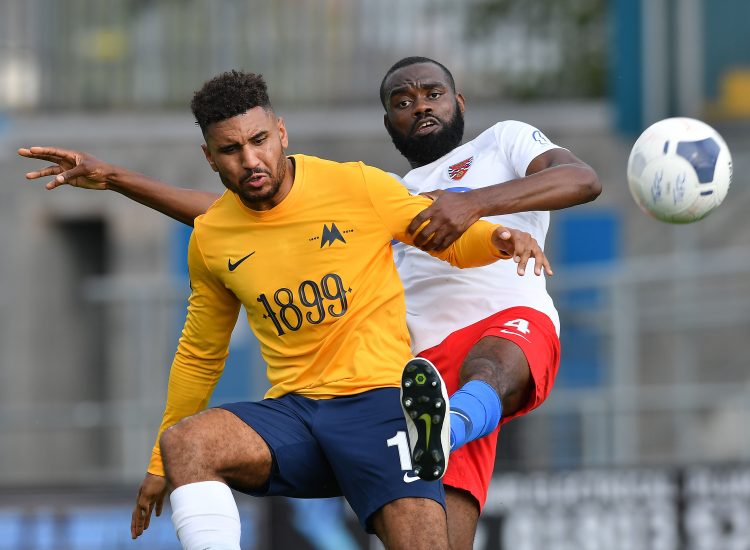 United had to settle for a hard-earned point in a rare goalless draw against Dagenham & Redbridge at Plainmoor.

Gary Johnson made to two changes to the starting line-up that went down 1-0 to Chesterfield last weekend, with Joe Lewis and Matt Buse earning their places in the Gulls XI, at the expense of Ryan Dickson and Manny Duku.

The best chance of the early stages fell the way of The Gulls on five minutes, after Ben Wynter’s cross forced a corner.

Frank Vincent’s floated ball into the area caused chaos inside the box, with the ball falling invitingly for Lewis, who could only steer his half-volley wide of the upright.

More promise form the right-hand side was evident in the 12th minute, as Ben Whitfield combined with Kalvin Lumbombo-Kalala, who sent in tempting cross, but the onrushing Liam Davis couldn’t connect well enough to trouble The Daggers’ goalkeeper.

Although the visitors were competing well, it was Johnson’s side who were carving out the best half-chances. Another followed on 26 minutes, as a quick corner routine from Vincent picked out Buse in space by the penalty spot, but to United’s dismay, the midfielder dragged his effort well wide.

Three minutes later, Dagenham created a gilt-edged chance of their own, as a deep cross into the box found Angelo Balanta in space at the back post, however his effort was also off-target.

Although Lucas Covolan in the United goal did have his gloves warmed a couple of times prior the interval, neither effort unduly troubled him, and the scoreline remained blank at the break.

Eight minutes into the second-half though, Torquay’s Brazilian stopper was called into serious action for the first time as he expertly tipped James Dobson’s goalbound effort round the post.

At this stage, the visiting side were beginning to impose themselves on proceedings. This point was highlighted in the 57th minute, when a corner into the box caused drama, as a grounded Covolan could only watch as a Harry Phipps’ header struck the crossbar.

Just past the hour mark, the Yellow Army were up out of their seats in protest, as a delicious through-ball saw substitute Ruairi Keating break into the box, before crashing to the ground under a untidy challenge. Appeals for a penalty were strong amongst the United contingent, but were ultimately waived away by the referee.

As the game edged towards its finale, The Gulls were indebted to a couple of decent saves from Covolan, however it was United who came within inches of securing all three points in the last minute.

Keating, who had covered nearly every blade of grass following his introduction, was fouled on the edge of the box, leaving fellow sub Jake Andrews within familiar territory of sending in one of his trademark free-kicks.

With typical panache, Andrews sent the ball up over the wall and… onto the crossbar, with Dagenham ‘keeper Justham stranded.

The final whistle blew soon after, to signal a point well earned for both sides.

Johnson’s side have little time to draw breath before their next game, with Eastleigh the next visitors to Plainmoor on Tuesday. Tickets are available here.