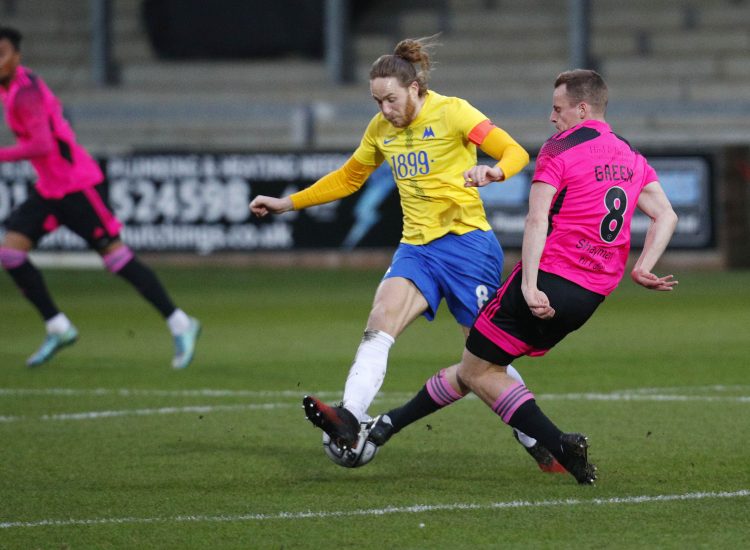 United went down to defeat on Saturday evening, as Halifax ran out winners at Plainmoor.

Sam Sherring’s unfortunate own-goal saw Town break the deadlock, before two Asa Hall penalties either side of the break turned the game on its head. That joy was to be shortlived though, as Jack Earing levelled things up, before Jeff King struck a late winner.

Manager Gary Johnson made two changes to the side that drew with Altrincham eleven days ago, as Ben Wynter made a welcome return from injury alongside back-from-suspension Connor Lemonheigh-Evans, with Jake Andrews and Max Sheaf dropping to the bench.

With the BT Sport cameras in attendance, it was United who initially looked more comfortable in possession, however neither ‘keeper was troubled during the early stages.

A half-cleared 13th minute free-kick saw the game’s first chance created, as Adam Randell’s dinked ball into the box was met by Josh Umerah, whose shot was deflected away from goal.

The resultant corner may have amounted to little, however the second – three minutes later – was far more testing for the visiting goalkeeper, with Sam Johnson forced to tip Lemonheigh-Evans’ delivery over the crossbar, just as it was threatening to dip under it.

It wasn’t until the 20th minute until Town threatened, and although Tahvon Campbell’s ambitious effort from the edge of the penalty certainly had the appropriate power, it lacked the direction to work Shaun MacDonald in between the posts.

Billy Waters, the hero of the hour last time out, nearly added to his tally in on 26 minutes, producing a slick turn and shot from a Ben Wynter through-ball, however his effort from 15 yards out was driven just past the far upright. 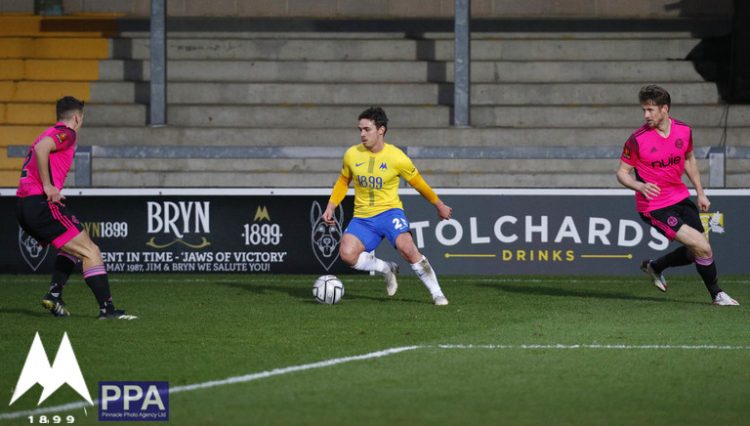 Despite bossing possession, it was Halifax who took the lead though, following a moment of real misfortune in United’s 18-yard box.

King’s 34th-minute right wing cross forced MacDonald into action, however after parrying the ball away from danger, the ball struck the retreating Sherring and cannoned into the back of the net to give The Shayman the lead.

Johnson’s men had every reason to feel aggrieved at the way they had fallen behind, however they responded in the best possible fashion.

Hall nearly provided an eye-catching leveller two minutes later, however his dipping shot from 22 yards was well watched by ‘keeper Johnson, who diverted the shot over the ‘bar.

Ben Whitfield had already proven to be a real menace on the left, and in the 41st minute, his clever play finally led to parity.

After cutting inside, his quick feet proved too much for King, who turned from hero to villain within just a few minutes, as the referee awarded a penalty kick. 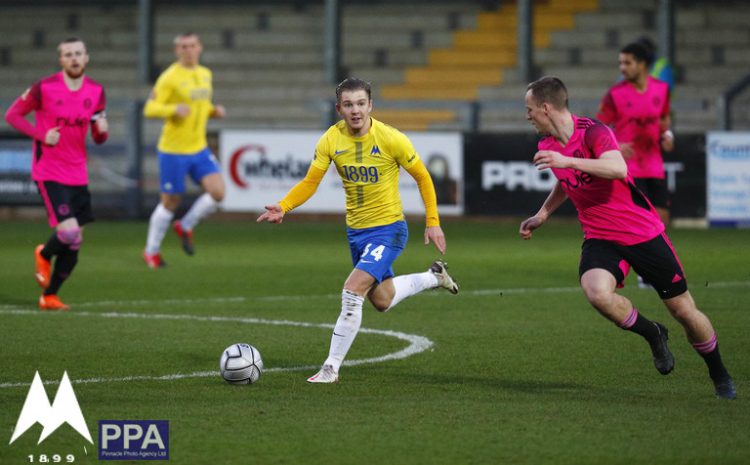 Skipper Hall responded in a manner befitting of the skipper’s armband, as he calmly sent Johnson the wrong way to make it 1-1.

Although that goal sparked some renewed vigour amongst the home ranks in a bid for an interval advantage, the scores were all-square as the players headed towards the tunnel for the half-time break.

After soaking up plenty of pressure from The Gulls during the first period, it was Halifax who were enjoying more of the ball following the restart.

On 54 minutes, a mazy run from Earing saw him work his way into shooting range from the left, however despite being well placed, the Town man fired his effort too high.

Four minutes later, and a swift break from Jamie Allen down the right resulted in a low cross into the box that Campbell reached first, however to the Yellow Army’s relief, he poked the ball wide of the upright.

The visitors seemed to be building up some momentum, however just as had happened in the first half, it was the team soaking up the majority of the pressure that edged in front in the 71st minute

After picking up the ball on the edge of the box, Lemonheigh-Evans took time to look up before delivering a tempting cross towards the back post where Waters rose to meet it. The Torquay striker’s bid to make connection was ended illegally by King once more though, with the officials again perfectly placed to make judgment.

A second spot-kick was the decision, and despite Johnson guessing correctly this time, Hall delivered his ninth goal of the season to put his side in front.

After breaking upfield, Earing’s shot from the edge of the box forced MacDonald into an unorthodox save, however in the goalmouth scrambled that ensued, it was the same player who managed to work enough space to fire the ball through a crowd of bodies and into the net via the far post.

Reeling from that disappointment, things got worse ten minutes later.

Having enjoyed an eventful afternoon at both ends of the pitch, King showed composure on the edge of the box to ride a couple of challenges, before curling his effort past MacDonald and into the top corner.

Hall nearly salvaged a point – and claimed a hat-trick in the process – with a low drive that drifted narrowly wide of the left post with a minute remaining, however there was to be no late savior for United this time around, with the full-time whistle signalling defeat soon after.

With fixtures continuing to come thick and fast, Johnson’s men don’t have to wait long for their opportunity to put this result behind them, with a trip to Solihull Moors next up on the agenda on Tuesday evening.