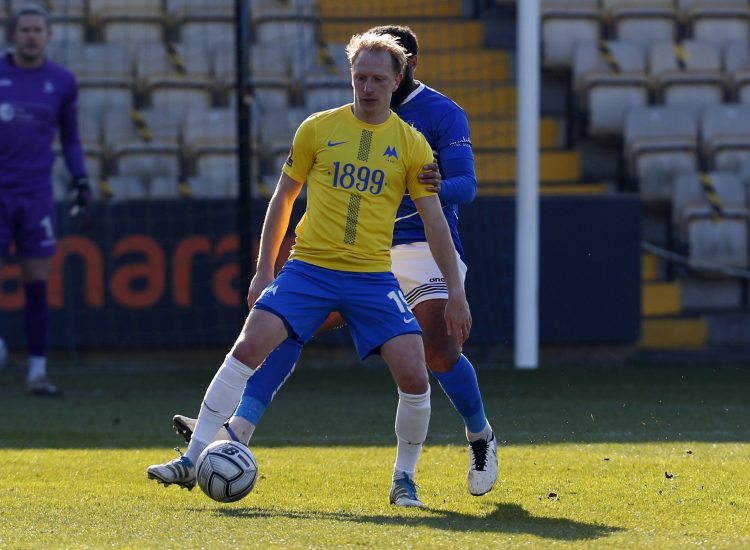 There was disappointment for United on Saturday, as Hartlepool returned to the North-East with all three points.

An early Luke Molyneux goal gave Hartlepool something to hold onto, and despite a spirited performance thereafter, Torquay were unable to respond to grab a share of the spoils.

Boss Gary Johnson made four changes to the side that bowed out of the FA Trophy to Woking last weekend, with Shaun MacDonald, Joe Lewis, Armani Little, and Scott Boden taking the places of Marcin Brzozowski, Matt Buse, Max Sheaf and Billy Waters.

In almost perfect conditions, it was Hartlepool that created the first half-chance, with an early corner half-cleared to the edge of the box, however Jamie Sterry’s effort was well off-target.

Five minutes later, and a Torquay set-piece proved much more threatening, as Jake Andrews’ flag-kick at the other end found Asa Hall rising to flick the ball across the face of goal, however the ball unfortunately evaded the lurking Lewis.

It was certainly an entertaining opening start to the match, with both sides trading proverbial punches without success, until 14 minutes as Hartlepool took the lead.

In the centre of midfield, Luke Armstrong playing an inviting ball in between United’s centre-back pairing, allowing Molyneux to slot the ball past the advancing MacDonald and into the net.

Boosted by the goal, the men in yellow were forced to soak up some further pressure in the ensuing minutes, as the visitors went in search of a second. The Gulls held firm though, and it wasn’t long before they had begun asking a few questions of their opponents once more.

A neat passing move on the edge of the area found Boden with half a sight of goal, however after checking back onto his left foot, a recovering Pools centre-half made up enough ground to divert the ball wide of goal.

United’s pressing game was by now in full flow, and the visiting side were forced to get back in numbers in a bid to repel Johnson’s men.

Despite enjoying the lion’s share of possession up to the interval, Ben Killip remained relatively untroubled in the Hartlepool goal though, with a number of dangerous through-balls just having a little bit too much on them.

On the stroke of half-time a lovely move between Adam Randell, Ben Wynter and Ben Whitfield so nearly provided the ammo for Boden inside the box, however a last-ditch piece of defending saw the ball robbed off the frontman’s bootlaces from eight yards, just as he was about to pull the trigger.

A goal down at the break, however there was plenty of reasons to be hopeful ahead of the second period as the two sides headed towards the dressing rooms.

Once things got back underway, the pattern of the game initially continued, as The Gulls went in search of an early leveller.

In the 50th minute, a delightful crossfield ball from Little found Connor Lemonheigh-Evans eight yards out, and after turning two men inside out, the Welshman worked enough space to fire in a low show that Killip had to parry past his near post.

Hartlepool managed to soak up United’s latest forays forward, and as things wore on, they began to pose a more consistent threat to the Torquay backline.

In the 64th minute, goalscorer Molyneux jinked his way in from the right-hand side dangerously, and after exchanging passes, the same man fired in an effort that had to be blocked at source.

There was certainly no let up in terms of effort from the hosts, however as the match ticked into the final ten minutes, the pace of the match had visibly dipped, with little way of openings appearing in the away penalty box.

In fact, it was the Pools who came closest to scoring in the latter stages, with a deep corner evading the grasp of MacDonald, forcing his covering defenders to head Armstrong’s effort off the goalline.

With three minutes to go, the persistence of Josh Umerah nearly helped his side salvage an equaliser, however despite his low cross from the right finding fellow sub Waters six yards from goal, his instinctive effort found the gloves of Killip, who gathered at the second attempt.

The final whistle that followed signalled defeat, however there will be plenty more twists and turns during the course of the remaining 19 games, and the next test for Johnson’s charges will come in the shape of a trip to Boreham Wood in seven days’ time.