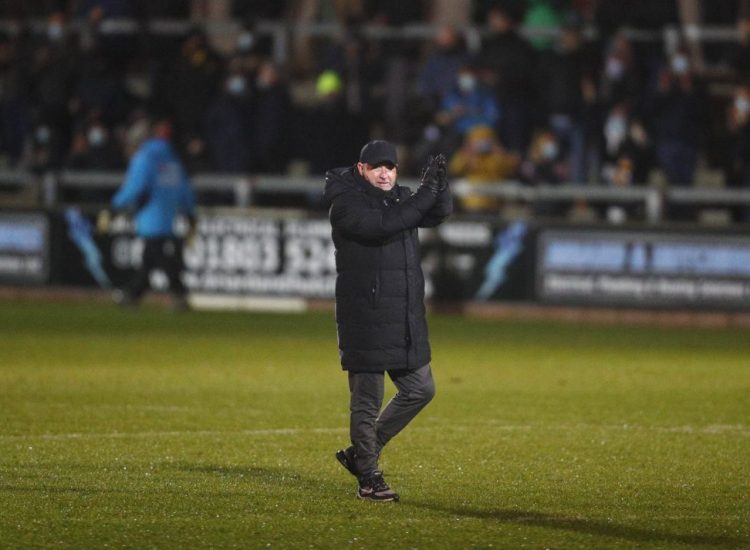 United manager Gary Johnson was understandably delighted after seeing his side produce an outstanding performance on Boxing Day, as they beat West Country rivals Yeovil Town 6-1 at Plainmoor.

“I thought the boys were magnificent today,” began Johnson.

“They’re not any mugs, Yeovil, and we’ve got to play them in a week’s time, so you have to be a little bit humble in victory where you can, but it was a fantastic result, some great goals and it was nice to get six. We’ve been threatening it a few times. Against Dagenham we didn’t score, Kings Lynn was one where we didn’t really create enough chances, but the boys were dangerous – very dangerous today – and we made sure we won the game well.”

The manner of the victory owed a lot to the work put in by Johnson and his backroom team behind the scenes, as the hard graft paid off handsomely as six different players got on the scoresheet in front of a delirious festive crowd.

“It’s not as easy as just telling them what we want. We looked up for it – we are always up for it, but me and Downsey worked hard on making sure our passing was a bit more crisp. The boys showed they could receive a pass, and of course, when you get into dangerous areas, it’s just that last ball and finish. I won’t go through them all, but every goal we probably spoke about this week in our training session, to get the end product better.

“It’s lovely to get another six goals and keep us well ahead in goal difference, because that’s an extra point if you’re still ahead at the end. It means we are getting more people into danger areas, more people that are finding them in danger areas – I wish we had a week to enjoy it!”

First half injuries to Armani Little and Danny Wright may have taken a little shine off an otherwise superb day at the office, however it was to the team’s credit that they refused to be put off their stride, ahead of a trip to Weymouth in just two days’ time.

“Our disappointment is with the injuries. We’ll assess them tonight and tomorrow, because at the time Wrighty and Armnani were causing havoc, but we’ve kept on scoring goals so that was good. We’re in tomorrow, and we’ll suss out who’s fit and who’s not fit, but we’ll have a team, and what we know is whatever team we put out, it’ll be a good team.

“The Christmas period is like a third of a game each time, because they’re so close. We’ve done the first third of Christmas, now we have the next third against Weymouth, and Yeovil will be looking forward to turning the tables when we go there. We’ve got to be ready for that as well, but least we have 24 hours to enjoy this result.”

The Gaffer also took time to praise the Yellow Army, and acknowledged the support his side received from both inside Plainmoor, and also from those watching on at home.

“They gave us good support. It was good that the 1300 or so that were here to support us were able to see it live, that was nice, and for the ‘streamers’, we thank them for watching the game, and I’m pleased we’ve given them another good game for the TV.”