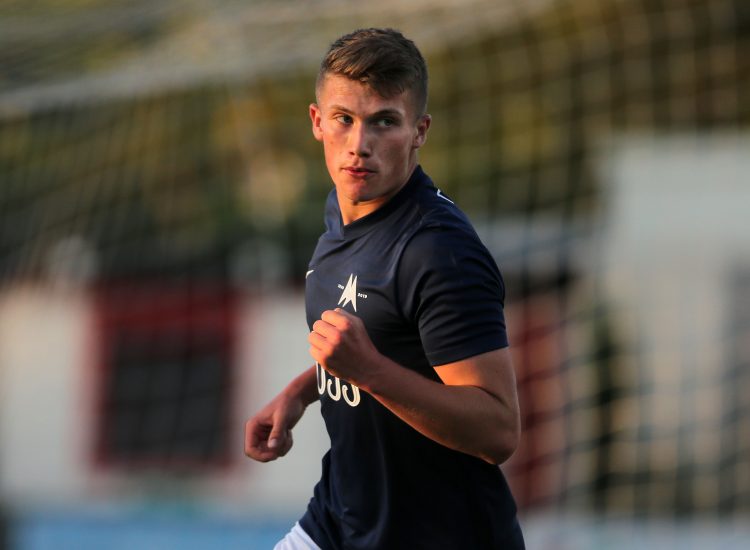 Having figured in United’s first-team plans for the past two seasons, it’s early to forget that young Gulls striker Olaf Koszela only turned 18 at the end of March.

Having already forged a enviable reputation for himself at youth team level, 2019/20 saw Olaf continue to score goals at almost every opportunity, while continuing to develop his all-round to meet the rigours of National League football.

After making his debut as a substitute in the FA Cup 1st round defeat against Woking in November, Koszela began to feature more prominently towards the end of the campaign, as Gary Johnson’s side strode towards the National League South title.

It was in Torquay’s first game as champions in April 2019 that Olaf notched his first goal at senior level, powering home a header in typically adept fashion.

Once the title celebrations subsided, and thoughts began to turn towards the club’s return to the fifth tier, an opportunist strike in United’s opening pre-season win at Bideford provided the travelling Yellow Army with another timely reminder of his capabilities, prior to his loan move to Southern League side Tiverton Town a few weeks into the new season.

Gulls boss Johnson was quick to emphasise that the move represented an ideal opportunity to gain valuable game time at a good level during his temporary spell at Ladysmead. Koszela was equally prompt in delivering his response, netting on his debut  in a 2-2 draw at home to Hayes & Yeading.

With eight games under his belt, a return to Plainmoor duly followed, as Olaf gained his first taste of National League action in the away defeat at Chesterfield in mid-September.

Although only one further appearance would follow at that level before the season was brought to a premature end, further chances to impress would be taken throughout the course of the next few months.

Strikes in friendly matches against young Bristol City and Plymouth Argyle sides took place at either ends of the campaign, with a hat-trick at Elmore in-between sealing St Lukes Challenge Cup progress before Christmas.

Although young enough to still figure in Chris Todd’s U18 side, his extraordinary tally of 30 goals in just 9 matches are ample proof that his natural level is now well beyond that, and with more opportunities set to come his way in 2020/21,  next season promises to be an exciting one for one of Torquay United’s own.

Thank you to all our sponsors, including Olaf’s Player Sponsors: