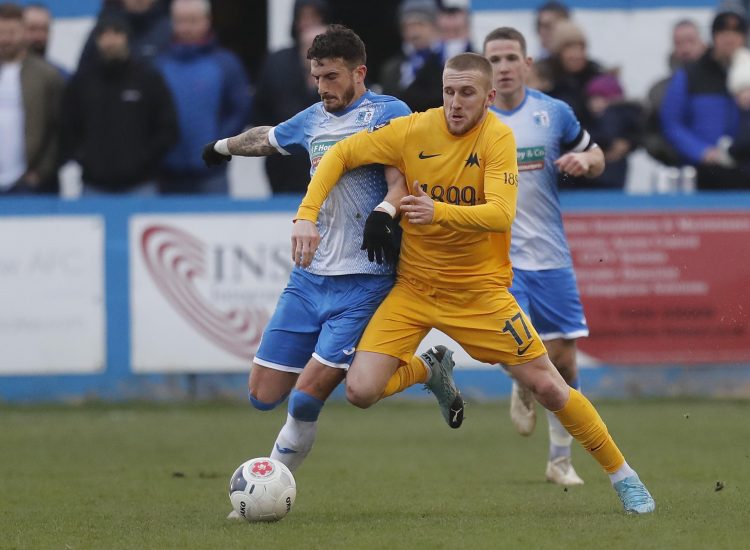 United slipped to defeat in Cumbria on Saturday, as league leaders Barrow came from behind to emerge as winners at the Progression Solicitors Stadium.

Things looked bright for The Gulls when Kyle Cameron prodded the ball home to give United the lead just after the hour mark, before Barrow responded soon after through John Rooney and Scott Quigley.

Gulls’ manager Johnson made two changes to the starting line-up that began against Ebbsfleet last weekend, with Cameron replacing Robbie Cundy in defence, and Armani Little returning to the starting line-up for the first time since the reverse fixture against Barrow back in October. Kalvin Lumbombo-Kalala dropped down to the bench.

United began the game well, with Ben Whitfield winning his side a corner within the first three minutes. From Connor Lemonheigh-Evans’ flag-kick, the ball was headed towards goal by skipper Asa Hall, only for Josh Kay to clear the ball off the line to prevent The Gulls taking an early lead.

The home side settled soon after though, with Johnson’s men having to remain alert to keep their opponents in check.

The strong wind and sandy surface weren’t promoting flowing football, and both teams were taking some time to adapt to the tricky conditions.

It wasn’t until the 24th minute that Barrow seriously threatened Covolan’s goal, with Kay firing narrowly wide from a swift counter, after Lemonheigh-Evans was robbed of possession.

Gary Warren was once again producing a composed display in the heart of United’s defence, with a couple of timely interceptions denying the home side.

As the interval approached, the travelling Yellow Army will have been pleased with the resolute defending shown by their side, which had given them a decent platform to build from during the second half.

Torquay responded after the break by taking the game to their hosts.

First, Armani Little fired over from the edge of the box in the 47th minute, before some excellent hold-up play from Jamie Reid saw Lemonheigh-Evans shoot into the side netting moments later.

Despite playing into the wind, United continued to press on, with Reid then playing Whitfield into space three minutes later, however his shot was lacking the power to test Joel Dixon in the Barrow goal.

With Little beginning to probe and stretch the home defence, The Gulls were enjoying their best spell of the game as they went in search of the opening goal.

Their work was finally rewarded in the 64th minute, amid bizarre circumstances. Joe Lewis’ free-kick found Hall inside the box, and after feeding Cameron to bundle the ball home with his knee, an assistant’s flag appeared to signal no-goal.

However, after consulting with the referee, the goal was awarded, much to the Yellow Army’s delight.

No sooner had Torquay got their noses in front though, they fell behind thanks to two goals in a five-minute spell.

First, a fine half-volley from Bluebirds talisman John Rooney levelled things up on 71 minutes, and then shortly after, joint-top scorer Scott Quigley caught Covolan off his line to lob his side into the lead.

United struggled to mount a bid for an equaliser in response thereafter, with the strong wind assisting Barrow’s backline in repelling Torquay’s forward advances.

There’s now a break in action for United’s first team, with a trip to North Wales to face Wrexham next up two weeks from now.