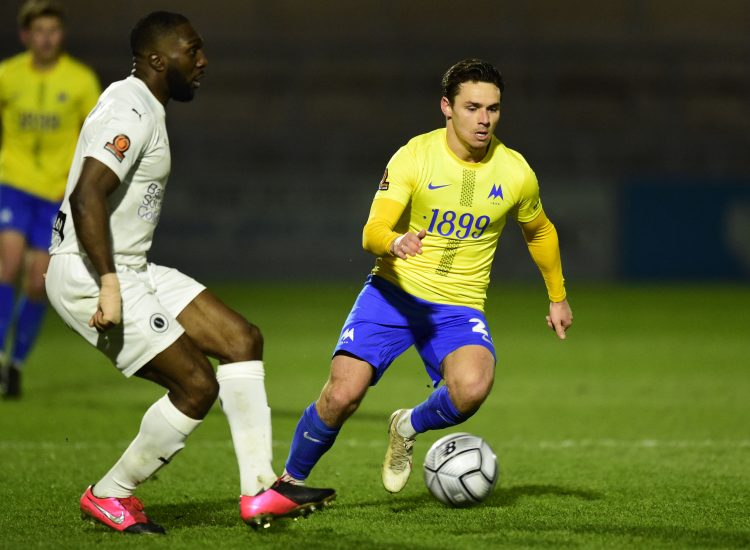 United were forced to settle for a point in Hertfordshire, as they battled out a goalless draw with Boreham Wood.

After Asa Hall saw his first-half penalty saved, chances for both sides to break the deadlock came and went, however both defences cancelled each other out as the match ended scoreless.

Boss Gary Johnson made one change to the side that went down 1-0 at home to Hartlepool last Saturday, with Jake Andrews replaced in the starting line-up by Billy Waters.

With the BT Sport cameras watching on in the evening sunshine, it was the men in yellow who started the strongest, with a number of early forays into enemy territory keeping the home backline occupied.

The Gulls were playing some delightful stuff during the opening stages, however the final ball wasn’t quite accurate enough for United’s attackers to profit from.

Despite playing second fiddle, it was actually the hosts who created the best opportunity in the 17th minute, as Wood striker Kabongo Tshimanga found enough space inside the box to send in a shot towards goal, however a deflection from a yellow shirt saw the ball drift wide of the far post.

Things became slightly scrappy thereafter, however in the 27th minute, United were gifted an ideal opportunity to take the lead after being awarded a penalty.

Just as a neat passing move threatened to lose its impetus, Ben Whitfield broke free down the left wing, and after sending in a dangerous low ball into the box towards Armani Little, Gus Mafuta intervened by bringing down the Torquay man, with the referee ideally positioned to take note, and point to the spot.

Skipper Hall stepped up, however after firing the ball to goalkeeper Nathan Ashmore’s left, The Wood stopper guessing correctly, palming it away to safety, to keep the scoreline blank.

After putting that disappointment behind them, Johnson’s men continued to enjoy the bulk of possession, and as the half wore on, more chances began to come their way.

On 38 minutes, an early Connor Lemonheigh-Evans cross from the right just eluded the head of Scott Boden, leaving Whitfield to execute a difficult volley at short notice, with his effort bobbling wide of the target.

Both defences remained unbreached during the remainder of the first 45 minutes, leaving the men in yellow on top in all departments – apart from the one that mattered most – at the break. 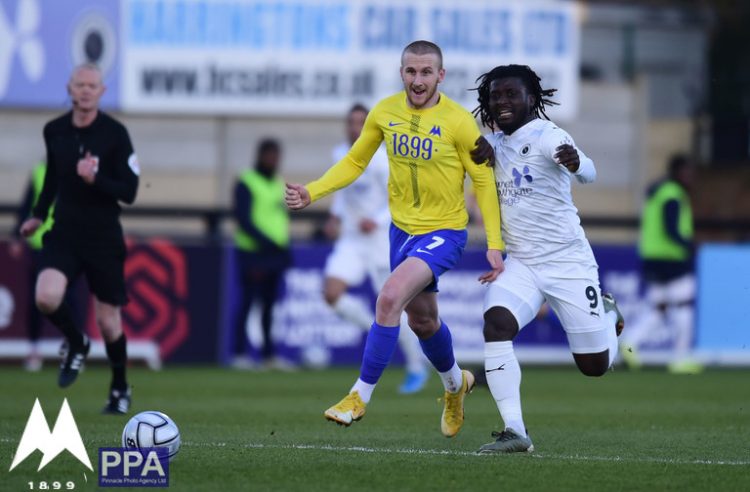 It was end-to-end stuff following the restart, with Whitfield recovering from a first half knock to see two snap-shots from the left of the box charged down in the 48th minute, before the ball instantly broke up the other end of the field, where Corey Whitely nearly outpaced a retreating Torquay backline in a bid to bear down on Shaun MacDonald, however Sam Sherring got in the thinnest of touches to divert the Boreham man’s shot round the post.

Nine minutes later, the hosts nearly took the lead following another swift counter, with Whitely finding space down the left this time, before finding Tshimanga with a low ball towards the near post, however it was to the Yellow Army’s relief that his shot cannoned off the far angle of post & bar, instead of dipping below it.

The same post denied the hosts again four minutes later, with Whitely this time going for goal himself, before United responded by Waters feeding Lemonheigh-Evans in the area from the left, however the trailing leg of a defender came to the rescue, getting the faintest of deflections to send the ball wide.

There was certainly no lack of entertainment on offer now, with a spilled Whitely effort forcing a combination of MacDonald and his defensive colleagues to keep the ball out in the ensuing scramble.

Again the action switched, with a fine piece of interplay from Whitfield and Lemonheigh-Evans seeing Waters presented with a clear sight of goal, however the Gulls striker couldn’t quite connect well enough to send his low shot past Ashmore.

With twenty minutes left, both sides were still going all-out for a winner, with all three outcomes remaining a distinct possibility.

In United’s search for all three points, a deep Adam Randell free-kick in the 79th minute found the intended target of the rising Hall, however his header went behind the goal, rather than across it.

In the 83rd minute, Marsh missed a gilt-edged chance to punish his former club, with the lively Whitely finding the ex-Gull at the back post, however at the crucial moment the Wood man fluffed his lines, by dragging his shot well wide.

As the match entered the dying stages, Johnson’s men were being forced to soak up more and more pressure, however they held firm to secure a welcome point.

The next test for United comes on Tuesday, as Johnson and his men head to Berkshire to take on Maidenhead.