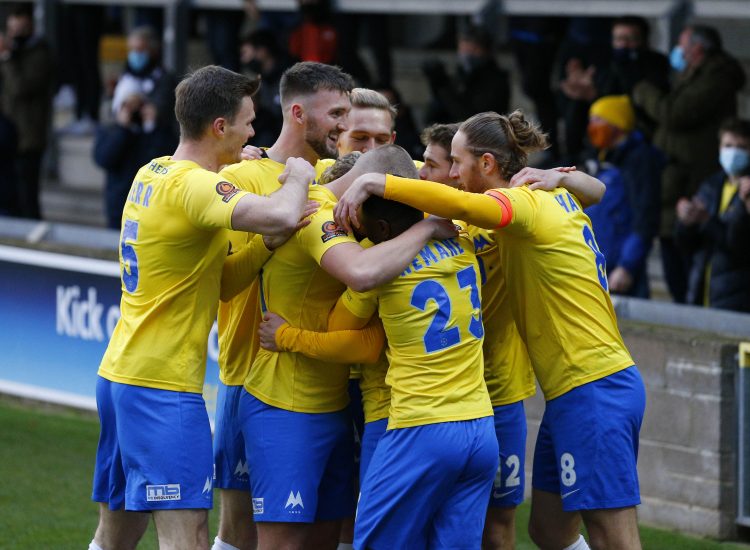 The Yellow Army enjoyed a winning return to Plainmoor on Saturday, as United ran out 3-1 winners over Wrexham.

Ben Whitfield gave United the perfect start, with the lead soon doubled by skipper Asa Hall from the penalty spot. The deficit was almost immediately reduced by Theo Vassell though, and the fans had to wait until deep into the second-half for Connor Lemonheigh-Evans to put clear daylight between the two sides once again.

United manager Gary Johnson made one change to the staring line-up that defeated Wealdstone away last time out, with Fraser Kerr making his full debut for in place of Ben Wynter, following the former’s brief cameo appearance on Tuesday evening.

The men in yellow wasted little time in welcoming back their beloved supporters.

There was less than five minutes on the clock when Lemonheigh-Evans produced some magical play. After controlling the ball majestically midway inside his own half, he set on a driving run into opposition territory before delivering a delightful cross-field pass that found Whitfield rampaging down the left wing. The Gulls winger weaved his way across the face of the penalty area before delivering a fitting finale to a fine move, as his low right-footed effort beat Christian Dibble at his near-post to give the Yellow Army a goal they had been waiting since February to celebrate. 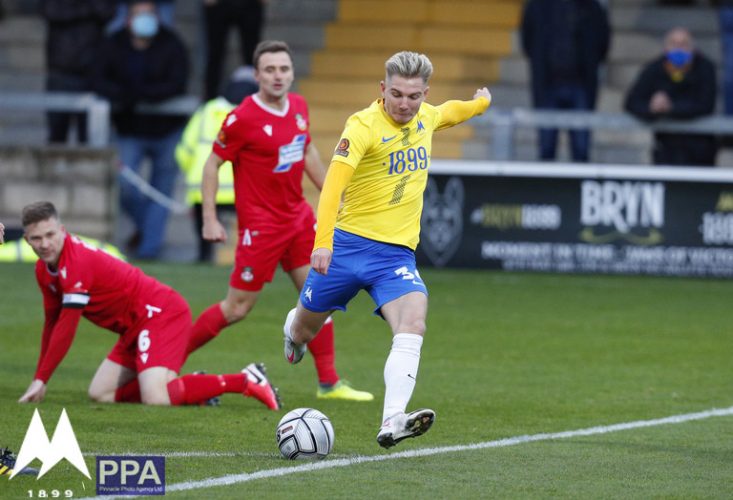 Feeding on the excitement around them, that goal only served to up the ante, with the visitors struggling to make any progress outside their own half, much to the delight of those watching from close-range.

Things got even better in the 17th minute. After winning a corner, the initial delivery appeared to have eluded Torquay captain Hall, however the referee was ideally placed to spot the ball strike a Wrexham hand, and promptly ordered a penalty.

Hall himself stepped up to take it, confidently smashing the ball high into the net to make it 2-0. 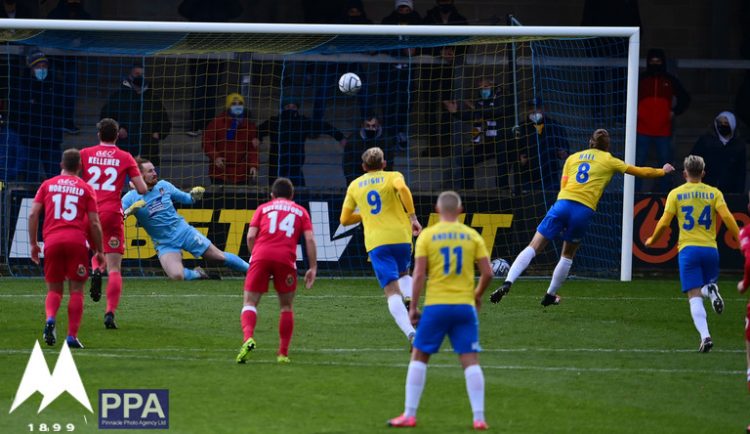 However, before the supporters inside Plainmoor – and at home – could begin dreaming of a real party, Wrexham pulled one back following a flag-kick of their own two minutes later.

Durrell’s whipped delivery found Vassell rising highest inside The Gulls’ 19-yard box, with the defender making it count by glancing his header into the net.

Although the home side continued to enjoy the bulk of the possession, the match was suddenly more evenly poised, and the entirety of Plainmoor held its collective breath in the 24th minute, after a mazy run from Jake Bickerstaff ended with the Wrexham attacker dragging his shot just wide of Shaun MacDonald’s upright.

The action soon switched to the other end though, and on 35 minutes, Whitfield came agonisingly close to re-establishing his side’s two-goal advantage.

After winning a throw on their right, some sleepy defending allowed Aaron Nemane space and time to deliver an excellent cross to the back post, where Whitfield delivered a back-post volley down into the ground, with the ball bouncing up over the ‘keeper and on its way into the goal, before the ball was desperately headed off the line by a covering defender.

Johnson’s men, clearly built to entertain, were playing some marvellous stuff that certainly warranted another goal, and moments later they went within inches again. This time it was a Jake Andrews cross that found the head of Danny Wright near the penalty spot, however the frontman’s header just cleared the post, with the glovesman beaten.

As the game entered the first of six additional minutes, it seemed United were doing everything but score, with the woodwork itervening next to deny them. More quality link-up play in the centre of midfield between Whitfield and Lemonheigh-Evans resulted in the ball being threaded through to the latter, who drove his shot past the sprawling goalkeeper – only to see the ball bounce off the far stick.

A slender lead then at the interval, however the standing ovation Torquay received as they headed for the dressing rooms felt as much as an appreciation for an excellent first-half showing, as it was the relief at just being able to do so once again.

They would have been hoping for another lightning-quick start when things got back underway following the break, and a familiar source nearly provided it.

Whitfield, one of Wrexham’s chief tormentors during the opening period, produced a typical skillful run towards goal, before beating a man and sending a purposeful effort just over the bar from 22 yards in the 51st minute.

The returning crowd were certainly evident shortly after, as Adam Randell’s burst into the box appeared to have been ended illegally by the retreating Fiacre Kelleher approaching the byline, however despite vociferous appeals on both sides of the pitch, only a corner was signalled. 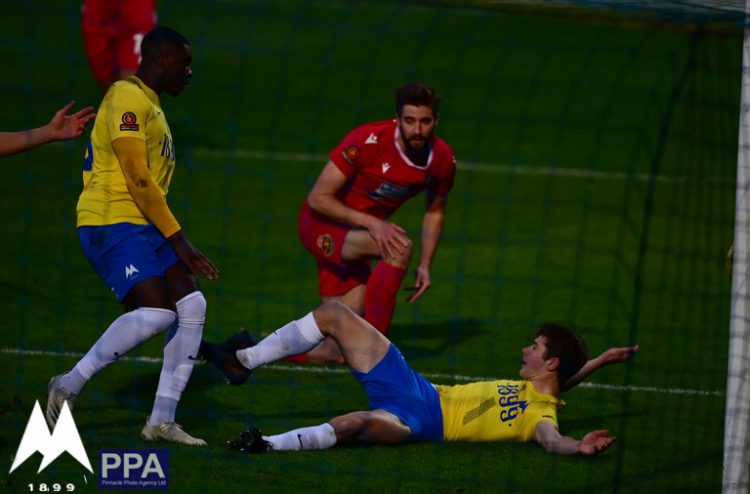 The resultant set-piece very nearly delivered the goal anyway, as Kyle Cameron’s looping header threatened to dip just below the crossbar, forcing Dibble to tip it over.

That double let-off appeared to inspire the away side, who began imposing themselves on proceedings for the first time.

With the pace of the game dropping temporarily, the travelling Red Dragons seized upon the opportunity by launching a number of forays into United territory, something that had been a rarity during the previous hour or so.

Midway through the half, an interception from Hall on the edge of his own area saw the ball fall fall kindly for Jamie Reckford 20 yards out, however the full-back’s effort was drilled narrowly wide.

Much as they tried to regain their earlier dominance, the ball just wasn’t flowing like it had earlier in the afternoon for The Gulls, however in the face of a few visible nerves arising on and off the pitch, it was 3-1.

Nemane was constantly looking to make inroads down the right-hand side, and after his determined run in the 74th minute bought him enough space to switch the ball to the opposite side, it allowed his Whitfield the time to feed Lemonheigh-Evans, who duly slammed the ball home from eight yards, after a favourable bounce aided his cause. 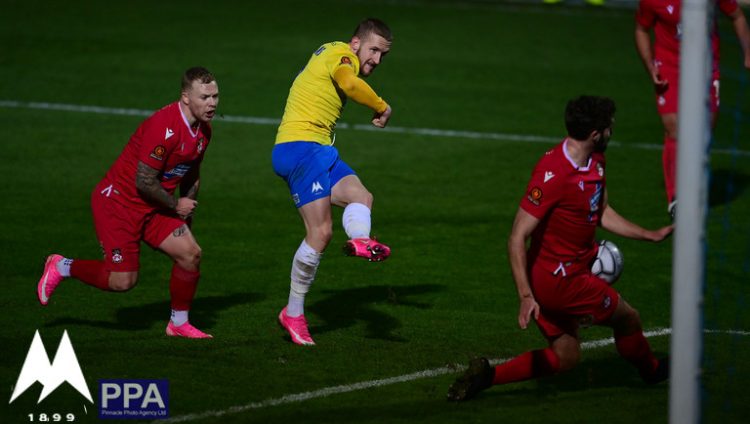 There was still time for the visiting side to mount a few late raids in the hope of restoring parity, however when Durrell fired over a stinging effort two minutes into stoppage time, with it went their slim hopes at spoiling the day for a restricted and socially-distanced 975-strong crowd.

After nine months without fans at Plainmoor, it was to the delight of everyone with United at heart that they crowned the reunion with all three points.

We’ve loved having you all back after so long, Yellow Army – How about we do it all again on Tuesday?