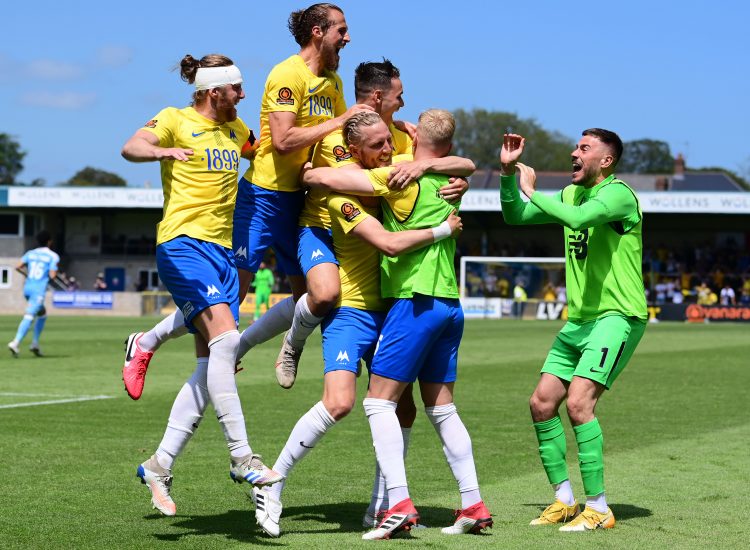 A Plainmoor epic saw United seal their place in the National League Promotion Final next weekend, as they eventually disposed of Notts County 4-2 after extra time.

Twice The Gulls went in front through Danny Wright strikes, with goals from Rúben Rodrigues and Adam Chicksen restoring parity to set up extra time. However, further strikes in the first period from skipper and leading scorer Asa Hall, followed by a penalty from Dean Moxey, saw Gary Johnson’s side progress through to the Ashton Gate.

After much discussion in the build-up to the Club’s biggest match in over a decade, manager Johnson made one solitary change to the side which completed The Gulls’ regular fixtures with a 0-0 draw at Altrincham, as Danny Wright made his long-awaited return to the starting line-up in the place of Jake Andrews.

United would have been after a good start – they actually got a perfect one.

A foray by Wright into the box eventually saw the ball worked out to Connor Lemonheigh-Evans, and although his low cross brought nothing more than a throw-in via a County boot, absolute elation wasn’t far away.

After receiving the throw, Joe Lewis floated a ball towards the back post where Wright rose to head past goalkeeper Sam Slocombe and into the back of the net.

Needless to say, Plainmoor – clappers and all – erupted. 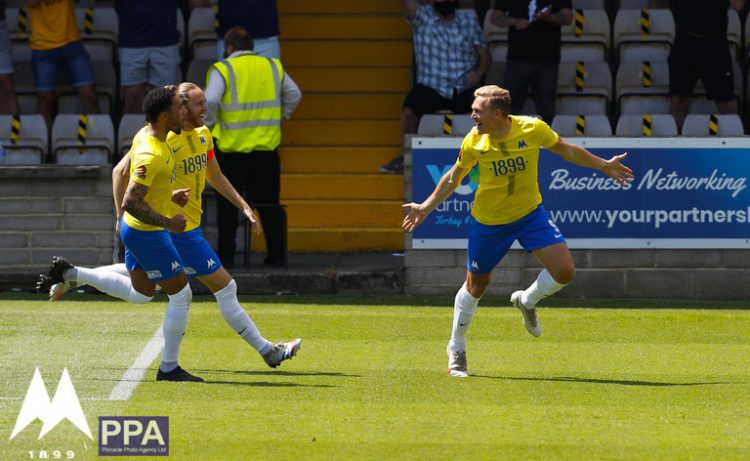 It took the visitors a little time to recover following that, with only a 12th minute strike from Enzio Boldewijn alerting Lucas Covolan, however the effort was well off-target and eventually bounced off the Wollens Away Terrace fascia high above the goal.

A minute later, and a long throw from Moxey was flicked into the path of the onrushing Lemonheigh-Evans, however the Welshman was off-balance, as his header sailed over the crossbar.

There were a couple more times that Torquay’s newly-crowned Player of the Season nearly broke free of the attentions of the County backline, and in the 35th minute, after picking the pocket of former Gull, Mark Ellis, he sent in an inviting cross towards the back post which Wright knocked back towards Armani Little, however United’s midfielder couldn’t quite make up the yards in time.

Then, out of nothing, County drew level with their first effort of the game. Dion Kelly-Evans made a penetrative run down the right wing before delivering a cross onto the head of the diving Rodrigues, who powered the ball past Covolan to level things up six minutes before the break.

That certainly lifted Notts and for the remainder of the half, it was they who looked more likely to score next.

Richard Brindley’s 41st minute rising effort from distance shaved the bar, however it was all-square at the break.

Having begun the first period so well, the men in yellow repeated the trick in the early stages of the second.

Adam Randell’s majestic flick past his opponent gave him the opportunity to exploit space down the right wing, and after dragging the ball back into the path of Wright, United’s evergreen centre-forward picked his spot delightfully to fire home a right-footed effort from ten yards to make it 2-1. 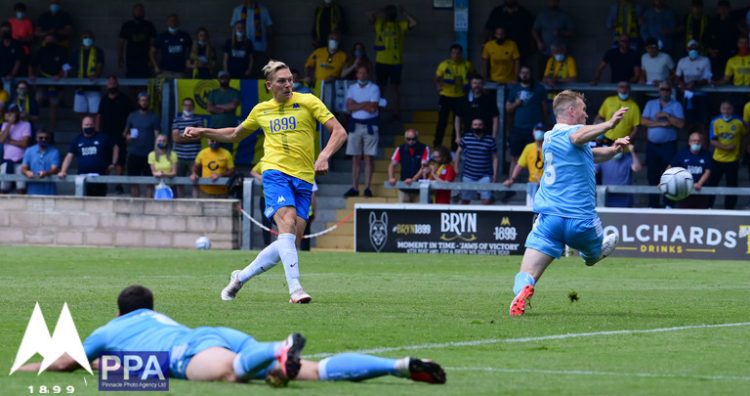 This time though, the lead lasted barely three minutes, as a corner towards the back post saw the ball fall to the foot of Chicksen, who found just enough space to rifle the ball into the roof of the net and equalise once more.

Undaunted, Torquay went close to making third time lucky soon after, as a delightful through-ball from Lemonheigh-Evans found Kyle Cameron bearing down on goal. Slocombe though, was equal to it, and smothered the shot.

As the match hit the hour-mark, Johnson’s men were beginning to regain their grip on territorial possession, however the visiting side continued to look threatening on the break when the chance arose, with Rodrigues jinking into the area before firing his low effort narrowly wide of Covolan’s near-post as the clash entered its final quarter.

Torquay’s aerial prowess continued to look their best source for a third goal, and with 13 minutes left, a Lemonheigh-Evans delivery saw Cameron head the ball back towards the penalty spot where Ben Wynter connected with a volley, however he had little time to adjust, resulting in the ball flying well over.

It was The Gulls who continued to force the issue as the clock ticked down, with the Yellow Army dearly hoping another ‘Gary Time’ goal was on the cards.

A looping Lemonheigh-Evans header from a Little cross nearly answered that call, as did a free-kick from substitute Jake Andrews from 25 yards – although the latter effort didn’t quite have enough on it to seriously trouble Slocombe in between the sticks.

No-one could prevent extra-time, and so a further half-hour ensued.

As is so often the case in encounters of this magnitude, the efforts of the previous 90 minutes initially had an impact of the pace of proceedings in the additional 30 minutes, with chances at a premium, however following a swift break between replacement pair Benji Kimioka and Billy Waters, a corner brought Johnson’s men more joy.

Andrews’ delivery – as it so often is the case – was delivered to perfection onto the head of Hall at the near post, and his glancing header went wide enough of the ‘keeper to edge The Gulls back in front.

Our talismanic captain received extended treatment for a headwound picked up for his troubles, further illustrating his commitment to the cause.

Having gone ahead three times, and been pegged back three times, United had to be on guard against letting it slip again. This time though, the lead was extended seconds after the belated restart. 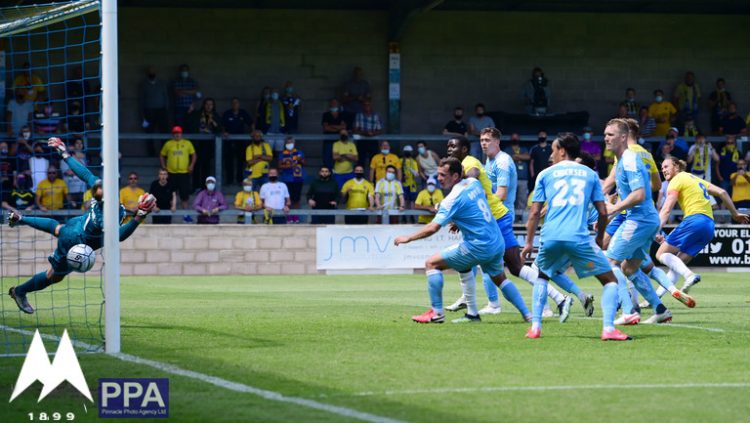 Kimpioka, whose pace was causing County lots of new headaches, ran at a tiring backline before a through-ball was sent perfectly into the path of Lemonheigh-Evans, and with Ellis’ challenge deemed illegal by the referee, the official had no choice but to point to the penalty spot.

With Torquay’s usual penalty takers unavailable, Moxey picked up the ball and steadied himself, before choosing a sublime moment to send Slocombe the wrong way and score his first goal of the season to make it 4-2.

That drama heralded the end of action in the first period of extra time, with the change of ends leaving United just fifteen minutes from a place in Bristol.

To their credit, Johnson’s men continued to press in search of a fifth, rather than sit back on their two-goal lead, whilst their defence maintained a vice-like grip on their adversaries at the other end.

As the minutes ticked down, and with the Yellow Army roaring them home, it became only a matter of time when all at Plainmoor could celebrate, and when the referee’s whistle eventually brought them that moment, the sheer joy on the faces of the players, management, supporters and staff said it all.

Of course – despite this sizeable step – the job isn’t done yet, and those players that gave it all for 120 minutes today will have to come up with a similar effort next weekend if they are to realise their dreaming of making up the sacred 92 once again.

For now though, savour the moment, Yellow Army, and take a bow – because you certainly matched the players’ significant endeavours out on the pitch today. 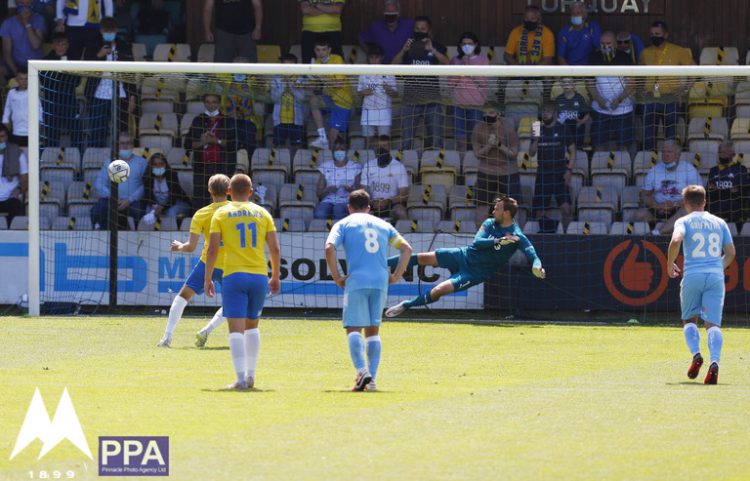