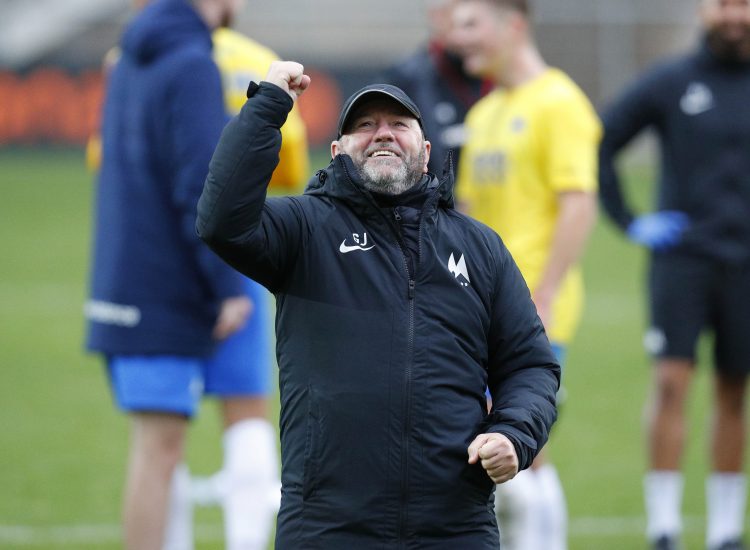 United manager Gary Johnson was understandably delighted after a 2-0 win over Dover saw his side claim a place at the top of the league standings at full-time.

“It was a good win, any win is a good win when it takes you to the top of the league,” began Johnson.

“That makes it even better, even though there is a game later tonight, we know that, but the boys have given everything for five games, and we’ve played some good stuff.

“We’ve kept Dover down to one or two chances, and created a lot of chances ourselves. We’ve scored two, and that was enough to win the game, and I’m proud of them.

Two goals from Kyle Cameron were enough to seal another three points, although in truth, the margin of victory could have been much more.

“Kyle was unlucky not to have another two today, with the goalkeeper making a couple of saves from headers. I’m really pleased with that, because you really do need to spread your goals through the team, and that’s what we’ve done today, and it’s good that we’re picking them up from set plays.

“Our deliveries are right on the button and we’re a bit more determined this year to get on the end of things. Cameron is coming on fine as far as that’s concerned.

Another pleasing aspect to the victory was a second clean-sheet of the season, as The Gulls look ahead to a seven-day break in fixtures, before they to Sholing for a FA Cup 4th round qualifying tie next weekend.

“It’s nice to get clean sheets, because to be fair to Dover they did have a little bit of possession, and you have to deal with that. We had a lot of breaks off their possession, but in the second half, we didn’t really take advantage of that. It was all-round very pleasing, and the boys have earned their day off.

“It’s a good start, four wins out of five in the National League is a very good start. We mustn’t rest on our laurels, we’ll still be working, still be trying to improve, and we’ll see how we go in the next five.

“Now we have all week to prepare for the FA Cup game.”