It’s All Going Wright For Danny 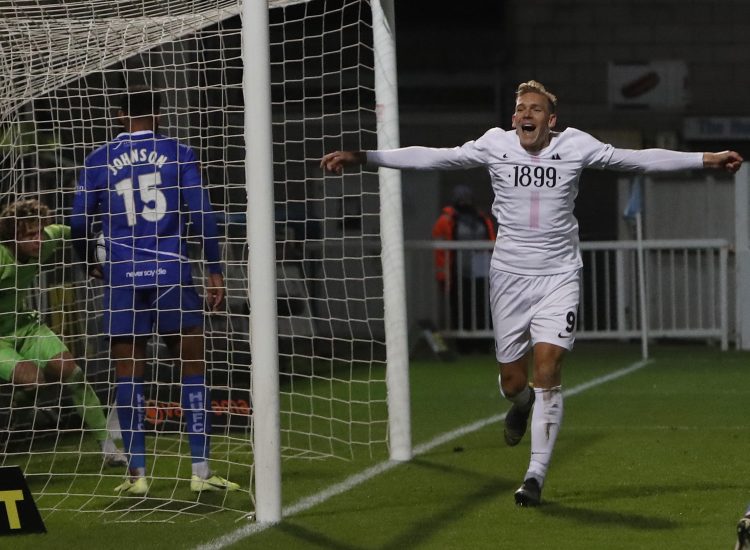 It’s All Going Wright For Danny

One of the many highlights of Saturday’s 5-0 away triumph at Hartlepool was the sight of striker Danny Wright walking away with the match ball, following a perfect hat-trick in front of the watching BT Sport cameras.

Although United’s leading scorer is always keen to promote the team’s successes above his own accolades, Danny is obviously delighted to make his own mark on the team’s outstanding start to the season, which has seen him bag five goals in the last two matches.

“I was fortunate enough to have the easy task of putting away the chances that the lads created, and I’m very happy to say the least!

“It rounded off a great week for us nicely. I didn’t actually think about it being the perfect hat-trick until after the game, when we spoke to the cameras, I was obviously just happy to score the three goals and win the game.

“I’ll take it, but even if it wasn’t the perfect hat-trick, I’d still be pretty happy with the result. It was a great statement to put out there in front of the cameras, and hopefully we can keep those kind of performances going, and keep us near the top of the table.”

Although there are never any trophies dished out in the opening months of the season, Torquay’s strong start to the campaign is just the kind that  boss Gary Johnson would have wished for, as the side finished October as the National League’s pace-setters.

“It’s a great start for us, it gives us a chance to build on the start we’ve made, but it is still early days and we’re not getting ahead of ourselves. We know there’s still a lot of hard work, and a lot of good performances, needed from us from now until the end of the season if we are going to be challenging up there.

“I think we’ve got some good players in our squad, and we’ve got the right attitude to go with that. I think as long as we keep producing performances like that, we can look forward to what the season can bring.”

Having joined Johnson’s squad from Solihull Moors in the summer, those last two wins on the road provided plenty of evidence of the growing understanding between Danny and his teammates, the benefits of which are already clear for the Yellow Army to see.

“When new players come into the team, it takes a little while to work each other’s games out, but we’ve got our style of playing football. The gaffer and coaching staff have philosophies and an understanding of the game which we use, and over the last week, we’ve been showing that out on the pitch.

“If everyone is on the same wavelength, you produce performances like that and it all comes off. It looks fluent and that the team have been playing together for years. At the start of the season, we picked up points late on in games, and during the last week we’ve bettered that and produced some outstanding performances to rack up the goals, which is something we were looking to do.

“I am delighted with the start we’ve made that, and hopefully the hard work and attitude will continue through the squad, and we can produce more.”

With National League matters temporarily going on the back-burner ahead of this weekend’s FA Cup clash with Crawley at Plainmoor, Wright is in positive mood, but insists there is plenty more to come – from both himself, and the team as a whole.

“Sometimes you need a bit of luck for a few goals to go in, but I’m delighted with the start I’ve made. We’re creating chances in all the games, it’s been a real high performance from all the squad so far this season, and we’ll definitely be working hard to keep that going.”