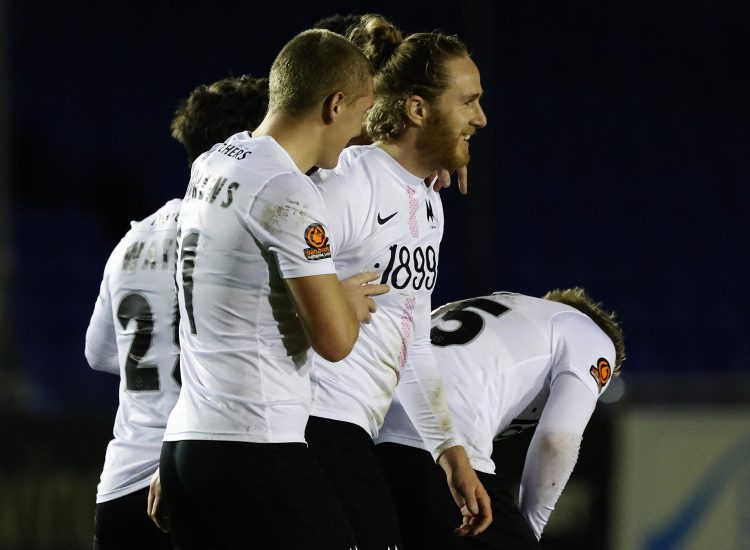 United claimed a vital win at Solihull Moors on Tuesday evening, as they ran out 2-1 winners at Damson Park.

Following his penalty double on Saturday, United skipper Asa Hall fired home from the spot once again to give his side a first half advantage, before that lead was extended through Billy Waters just past the hour mark. A late red card for Shaun MacDonald, followed by a response from Moors’ Alex Gudger signaled some frayed nerves as the match clock went into three figures, however The Gulls held on to record three crucial points to maintain their lead at the top of the table.

Gary Johnson made two changes to the side that went down 2-3 to Halifax on Saturday, with Jake Andrews and Matt Buse recalled to the side in place of Josh Umerah and Kyle Cameron – the latter missing out through injury – whilst new loan signing Scott Boden took his place on the bench.

The Gulls started well, with captain Hall nearly marking a return to his West Midlands roots with a near-post header from Andrews’ second-minute corner, however his effort went wide of the target.

The home side were struggling to get hold of the ball in the early stages, however they nearly made the most of a brief foray into the opposition half on twelve minutes, with a swift counter leaving United struggling for numbers at the back. Thankfully though, Adam Rooney drilled his low strike wide from the edge of the box.

The breakthrough eventually came the way of Johnson’s side through a familiar source on 18 minutes.

Ben Whitfield found space on the left-hand side, and with his threatening cross striking the arm of Gudger deep inside the area, the referee was well placed enough to provide instant judgement and point to the spot.

Hall, who had already dispatched six penalties with relative ease so far this season, stepped up to send Moors goalkeeper Ryan Boot the wrong way for his tenth goal of the season. 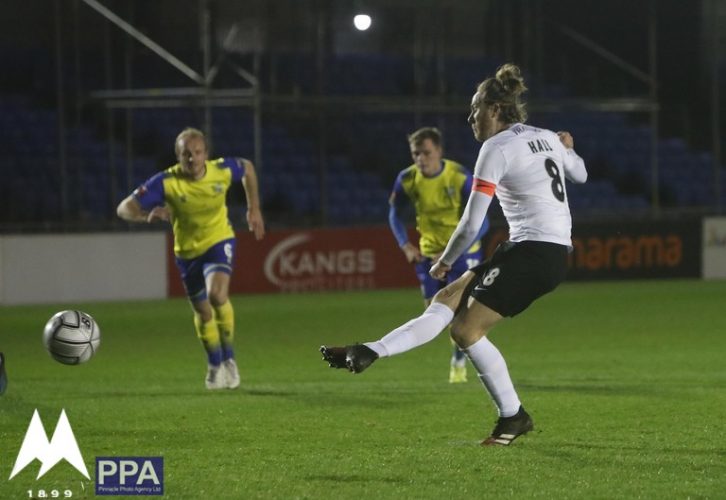 Torquay continued to dominate the possession stakes during the next twenty minutes without creating clear-cut chances, although the eager running of Waters in attack was ensuring that Solihull’s defenders enjoyed little peace when trying to play the ball out from the back.

Although playing second-fiddle to United all over the field, the lack of any addition to the scoreline continued to give the hosts hope.

A second goal so nearly came in the 44th minute, with a lovely move between Buse and Adam Randell down the right ending with the Plymouth loanee delivering a low cross towards the near-post, however Waters couldn’t quite reposition himself enough to trouble Boot in between the sticks.

A goal to the good at the break then, and it was the least The Gulls deserved following a composed first-half showing, albeit with a strong wind at their backs.

When things got back underway, it soon became obvious that the conditions were no longer in their favour, as the home side instantly went about restoring parity.

Having bossed proceedings during the first 45 minutes, United were forced to soak up a fair amount of pressure early on, however the Torquay backline remained resolute in the face of it.

Johnson’s men were now the side looking to gamble on the counter attack, and a 55th minute break down the left through Waters just failed to pay dividends, with Connor Lemonheigh-Evans just unable to make up enough ground to meet a low cross at the back stick.

With an hour gone, the watching Yellow Army will have been delighted to have seen their side maintain their lead, and moments later, there was cause for even more celebrations in the front rooms across South Devon.

A delightful ball forward from Lemonheigh-Evans was played to perfection towards the ever-willing Waters, with the striker taking the ball into the left-hand side of the box, before cutting back inside and sliding the ball past Boot to make it 2-0 in the 62nd minute. 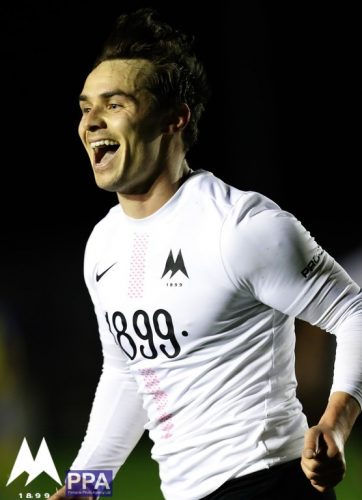 Seven minutes later, Whitfield was the quickest to chase down a loose ball, and although his goalbound effort was heavily deflected by a retreating Solihull defender, the effort still caused the some discomfort, with the flat-footed Boot relieved to see the ball bounce wide of the upright.

The brisk wind was certainly assisting Moors in their quest for a territorial foothold, however the game entered the last ten minutes, United’s defence remained unbreached.

The woodwork was summoned to come to their aid in the 85th minute though, as Ben Usher-Shipway’s long throw from the right caused havoc inside the six-yard box, with an overhead effort from Justin Donawa seeing the ball cannon off the crossbar, before thankfully bouncing away to safety.

However, with an initial seven minutes of stoppage on offer, there was still plenty of drama – not to mention even more minutes – in store.

A long ball forward behind Torquay’s backline left MacDonald with a decision to make, and whilst his bravery in coming out to deny the onrushing Kyle Hudlin could not be questioned, the referee showed little sympathy as both players hit the deck, with the United ‘keeper shown a second yellow card, followed by a red, resulting in a brief cameo debut for substitute glovesman James Hamon.

With the stopwatch already showing 99 minutes, Hamon could do nothing about Gudger’s scrambled effort from another long-throw to reduce the arrears just after his introduction, however thankfully that was as good as it got for the home side, who were condemned to defeat via the full-time whistle soon after.

After showing admirable resilience – not to mention ‘bouncebackability’ – with this victory at Damson Park, Johnson’s men can now take a break from league business, as they head for Surrey on Saturday to take on Woking in FA Trophy quarter-final.